Some respected screenwriting gurus claim that you should read and study as many screenplays as possible. It doesn’t matter if the film was a success or a flop: you learn either way. I agree. But more importantly, you should watch and analyze the movies.

For years, I blindly followed this dogma, as it seemed to make a lot of sense. Learn from good and bad examples. Don’t we all do that in other fields? With hundreds of screenplays readily available for download from www.script-o-rama.com, www.imsdb.com and other sources, it appeared to be a quick and easy way to study the craft of scriptwriting.

On average, I try to watch a movie a day, either in the cinema or on DVD. With the birth of my son late 2004, that became a bit more of a challenge. I found myself falling asleep in the second act. To remedy the ‘early fatherhood syndrome’, I would make notes, forcing myself to stay awake. As long as I had the discipline, I would even type them up into structural diagrams.

Suddenly, I had a revelation: the more I liked the film, the easier it was to find the Aristotelian three act structure and the principles of dramatic tension.

What was truly phenomenal was that to crack the key to the film’s story structure, it had taken me only the duration of the film plus a few minutes. If I had read the screenplay instead, I’d have spent hours reading and taking notes – and only then would I be able to start work on piecing together the structure. A finished film underscores the drama in ways that help you identify the importance of the beat, scene or sequence: through music, fades or the use of light and colour (Soderbergh’s TRAFFIC is an extreme example).

At the time of writing I was developing a story with Wojciech – “Aerosol” – Wawrzyniak, whose structure is vaguely similar to Kenneth Brannagh’s MARY SHELLEY’S FRANKENSTEIN (thank you, Chris) so we decided to read the screenplay and watch the movie.

That’s when the true value in reading screenplays became apparent: it allows you to compare script and finished film. It shows the areas where filmmakers struggled, where what was on the page didn’t translate into what was onscreen.

Comparing script and film also reveals where directors made last minute decisions because they didn’t believe the script worked (or more often, the money ran out). A great example is the Chicago Train Station climax in THE UNTOUCHABLES. Mamet’s original Third Act had Capone’s accountant going on the train, with a chase and shootout following. However, De Palma had blown the budget and was forced to improvise.

For years, De Palma had been dreaming of shooting a homage to Eisenstein ‘Odessa Steps’ sequence from THE BATTLESHIP POTEMKIN. A budget issue in THE UNTOUCHABLES finally threw the opportunity into his lap. In my view, reading lots of screenplays is the hard way to learning how to write good stories. However, analyzing a few classic scripts in terms of language, style and formatting may help you find the right balance to turn your final draft into a better read. 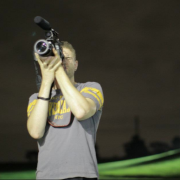