So here I am about to approach three years in L.A. (June 10 to be exact) and I feel the need to share my journey once again despite completely falling off the radar for well over a year with this confronting piece of my Hollywood sojourn. As I look back, it’s been an up and down rollercoaster ride full of trials, tribulations, emotion and adventure. But then what else was it ever going to be. While I have disappeared for months at a time (across social media, email and more), I am still alive, I’m still kicking, and I’m still flying the flag as best I can.

To be honest, that’s not always been easy. In fact, it’s been bloody hard at times.

There have been days where I have wanted to be anywhere else but this city. I’ve not left the country, let alone this state, in the three years I have been here, and if you know me you know how much I love travel. So it feels like I have been going stir crazy. But I found some solace as I discovered but then subsequently lost a relationship – my first here in the U.S and my first in over three years. And while I look back on that year we had with mixed emotions, I can only smile and say thank you to one very special woman who took her own serious leap of faith, and embraced me and my journey and in the process turned me into an even greater version of myself than I could have ever imagined. I am forever changed as a result.

But she wasn’t the only woman I had to say goodbye to that year.

I lost a grandmother and step sister all within six months of each other last year but I didn’t go back. I was super close to my gran and she used to take great delight in reading these articles. I miss her, and writing postcards from abroad just isn’t the same.

I left Australian shores knowing I may never ever see her alive again. But it was with her gentle words of encouragement that I was able to make peace with that cold, hard reality.

When she died last Mother’s Day, not only did I cry as the news filtered through, but I also had a beautiful vision of her that morning. She appeared before me and whispered: “Keep writing.” It was a profoundly affecting vision.

While all this disquietude, chaos, and loss was going on around me, somehow the only thing keeping me sane was my writing. And thank fuck! Because I am not sure where I would have been without it. I found myself sinking into a slow depression-like state during July yet I kept writing. My relationship was breaking down all around me but still I wrote. My grandmother passed, I wrote. My step-sister slowly had her life taken away after battling a brain tumor for years, more writing.

In the space of that one year, while my entire world was collapsing around me (even now I can shed some tears if I allow myself to reflect), my writing was my saviour. I wrote more than I ever have, I became more professional than I’ve ever been, and I churned out four feature scripts over the course of that year. One of which I pitched and which subsequently beat out over 40 other submissions vying for the gig.

After my relationship broke down I also found myself in the position of moving out of the only apartment I had ever known during my entire time here. I stepped up as a man and offered my ex-girlfriend the space. A space that no longer felt like home. A space that allowed her a better chance to survive in this town than me.

I then found myself in North Hollywood, and while that sounds glamourous, it really isn’t. There are two very distinct parts to North Hollywood. The cooler, funkier ‘Arts District’ and what is unaffectionately called, “the ghetto”. Somehow I went from the clean, green, central beauty of Studio City, to a dirty, dry backwater Mexican suburb (nothing against Mexico). From a private, spacious, comfortable apartment for myself and my girlfriend, to a smaller, cramped two bedroom place with two other guys – one of which slept on a couch in the lounge room.

At times I have felt embarrassed by my living situation but this town can be brutal and sometimes you are forced to go backwards to move forwards. But when you are freelance copywriter and the Australian dollar drops (and hard), you are forced to make some serious changes.

I hated going to bed alone. I didn’t like where I now found myself. I was miserable.

While I never ever lived above my means, I had to go where I could afford. It made me withdraw even further and made me truly understand the definition of humble, but what was more important, to look myself in the mirror and ask some very genuine, honest questions of myself.

But it has all served to only strengthen my resolve and succeed where many others would have failed, fled or simply given up.

My year turned and I met and fell into the most amazing, supportive writing group I have found during my time here, after I was fortunate enough to be accepted into a new writing program I applied for.

It was the first time I felt ‘home’ among like-minded people. A writing group that despite my repeated searches and hopes, I had never ever found in the two years prior.

And now this group of people I can call friends. How I have craved that. As I retracted from the outside world, I found my friendship base here shrink. In part due to changing dynamics as others disappeared, while a couple of others put their head down to become more professional themselves but also because I was seeking something deeper from myself, my writing… my heart.

It’s a writing group that’s made up of some talented and successful people where I have seen their valuable input and feedback further enhance, improve and rocket my writing skyward. A group of only seven other people who I get enormous pleasure from in so many ways. I cannot thank them enough.

Somehow I overcame a very tough, emotional year and became not only a greater writer for it but a kinder, more sincere, more authentic and honest me. So raise a glass and cheer on a man who continues to stare down this town. A man who is not afraid of a single thing. A man who will not make up the numbers. A man who will succeed. Because I have faced hardship, loss, death and yet I continue to smile and write.

Here’s to an even greater year of writing, greater success, greater wealth, and so much more as I continue to pursue dreams, my passion, and love. 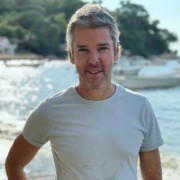