THE DA VINCI CODE came and went, PIRATES OF THE CARRIBEAN: DEAD MAN’S CHEST came and stayed and our own dear THE MORTAL COIL receives development funding from our own dear AFC! But let’s not distract from those other Things That Matter in the world of story and screenwriting. 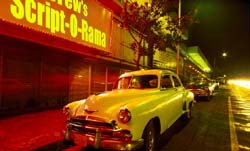 According to respected screenwriting gurus, one of the most important things to do for an emerging screenwriter is to read and study as many screenplays as possible. It doesn’t matter if the film was a success or a flop: you learn either way.

For years, I blindly believed this dogma as it seemed to make a lot of sense. Learn from good and bad examples. Don’t we all do that in other fields? With hundreds of screenplays readily available for download from www.script-o-rama.com, www.imsdb.com and other sources, it is also a cheap way to improve your skill.

I try to watch on average a movie a day, either in the cinema or on DVD. With the birth of my son late 2004, that became a bit more of a challenge. I found myself falling asleep in the second act. To remedy the ‘early fatherhood syndrome’, I would make notes, forcing myself to stay awake. As long as I had the discipline, I would even type them up into structural diagrams.

Suddenly this revelation: the more I liked the film, the easier it would be to find the Aristotelian three act structure and the principles of dramatic tension.

What was truly phenomenal was that to crack the key to the film’s story structure, it had taken me only the duration of the film plus a few minutes .

If I had read the screenplay instead, it would have taken me hours to read and take notes. Then the work would have only really started in order to piece the structure together from the notes. A finished film underscores the drama in ways that help you identify the importance of the beat, scene or sequence: through music, fades or the use of light and colour (Soderbergh’s TRAFFIC is an extreme example).

With Wojciech – “Aerosol” – Wawrzyniak, I am developing a story whose structure is vaguely similar to Kenneth Brannagh’s MARY SHELLEY’S FRANKENSTEIN (Thank you, Chris) so we decided to read the screenplay and watch the movie.

That’s when the REAL value in reading screenplays became apparent: it allows you to compare script and finished film. It shows the areas where filmmakers struggled because things didn’t really work the way they wanted.

Comparing script and film also reveals where directors made last minute decisions because they didn’t believe the script worked, or more often: the money ran out. A great example is the Chicago Train Station climax in THE UNTOUCHABLES. Mamet’s original Third Act had Capone’s accountant going on the train, with a chase and shootout following. However, De Palma had blown the budget and was forced to improvise. For years he had been dreaming of shooting a hommage to Eisenstein ‘Odessa Steps’ sequence from THE BATTLESHIP POTEMKIN. Finally the opportunity was thrown into his lap because of a budget issue.

In my view, reading lots of screenplays is the hard way to writing good stories. But analysing one or two classics on language, style and formatting may help you find the right balance to turn your final draft into an easy read.

Admittedly, Arnold Schwarzenegger is the last person you would expect to add value to a movie commentary. Well actually Paul Verhoeven does most of the job on this SPECIAL EDITION DVD, “innit?”. Can you believe Richard Dreyfuss was one of the original choices for the lead role??? Lucky Verhoeven told Carolco to snap the rights to the script off De Laurentiis, who had financial problems at the time.

More trivia: Verhoeven pinpoints the scene in TOTAL RECALL that gave him the idea to cast Sharon Stone for Basic Instinct. More interestingly, the director elaborates on the philosophical aspects of the story and Philip K. Dick’s original short story it was based on. It made me curious to hear his commentary on the controversial STARSHIP TROOPERS.

I find it brave of a director who claims his movie was very much misunderstood, to expressly deal with this issue on a DVD commentary. It probably helped that a few years had gone by and the initial frustration had faded.

Anyway, the dialogue between Verhoeven and writer Neumeier is interesting in the sense that it removes any doubt about the team’s intentions. Yes, fascism is BAD. And those that preach violence as a solution are BAD PEOPLE.

But further into the movie, the concepts get a little bit murkier to the point where writer and director are almost – but entirely unintentionally – contradicting each other on the subject of whether or not an audience should be given what they want, even if they happily consume the fascist material without raising questions. As long as the filmmakers’ intentions are pure… Hmmm. Not sure about this. Still: fascinating material to think and converse about!

What exactly is a synopsis? An outline? A treatment? If you are a writer trying to get your works produced or sold, it is important to know AND USE these formats. On the way to success, almost every writer will have to produce at least one of each for almost every work.

A while ago, the Australian Film Commission published an excellent document explaining the difference and the importance of these different formats. As unfortunately it lies buried deep somewhere within their extensive web site, I have taken the liberty to make it available for download here.

AN OFFER YOU COULDN’T REFUSE

I am a total JB Hifi addict, a foible shared by my lovely wife (phew!). But this time, I must draw your attention to the following AMAZING deals at EZYDVD (Australia):