Steven Miao created the opening video sting and Mukul Kandara helped with setting it all up. Thanks, guys!

The channel had been in the making for a long time, but I just have been too busy with clients, teaching and workshopping awesome projects. What I was planning on doing in January 2017 has finally come to fruition. Will I be able to keep it up? We’ll see.

In the first video, I talk briefly about the correct way to format audio and voice over on a black screen. So many times I have seen this done improperly in screenplays. Yet it is so easy…

Of course, something went wrong during the filming of that first YouTube video, so you couldn’t see the example I was talking about (you can see it below in this article).

I didn’t want to fix the video.

The hunt for perfection had been a curse for too long. An excuse for continued procrastination. It was time to ship.

In a way, your shipping is writing; sitting down to commit words to paper.

If you don’t write, great ideas won’t happen. If you don’t believe me, watch that TED talk with Elizabeth Gilbert again.

Okay, back to the formatting class.

The example I give in the video is from The Big Sick.

In the YouTube video, you can’t see it. My mistake. But here it is: As I said above: it is so simple! You just write ‘OVER BLACK’, and then you describe what we hear. At the beginning of a screenplay, this will be printed BEFORE the slugline that introduces the first scene visually.

The other thing people often ask me about is how to correctly write a title in the screenplay.

First, you don’t really call this a TITLE. We reserve this for the OPENING and CLOSING TITLES, like you will see in the example.

Mostly I see beginning writers open a scene with the slugline (or scene heading), and then immediately print the Super.

I don’t particularly like this, because the slugline doesn’t give me enough information to visualise the background that the title will be sitting over.

Mostly you will have a shot held for a few seconds before the Super comes in, like in this example from The Disaster Artist: 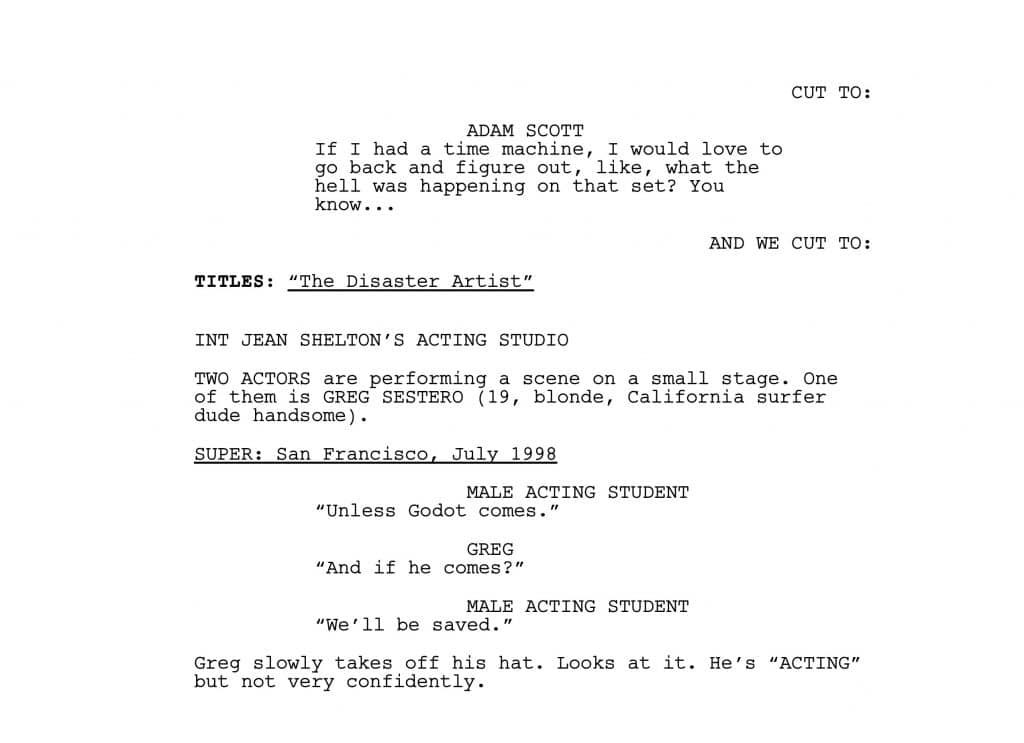 In the YouTube video, I mentioned that the slugline is imperfect. It should have a full-stop after “INT”, and ideally you also print the time of day at the end of the slugline, e.g. “INT. JEAN SHELTON’S ACTING STUDIO – DAY”.

Then again, my video wasn’t perfect either.

With all this talk about imperfection I may have given the impression that your script doesn’t have to be perfect.

Well, it doesn’t. Until you send it out…

But that’s a different video altogether.