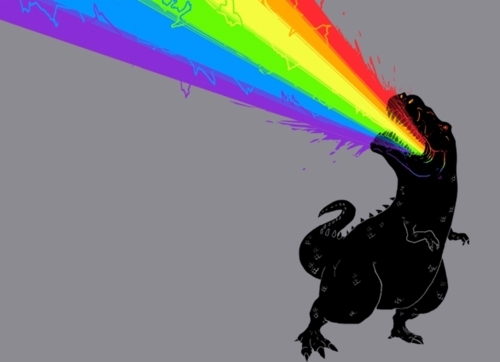 We’ve all seen it; that soap opera that’s been running a little too long. You can imagine the writers sitting around a whiteboard with the characters’ names – and desperation in their eyes.
Then they jump the shark.

And then, the inevitable happens. They resort to the supernatural. “Watch out Summer Bay, there’s evil lurking in town…a witch is coming and she’s bringing a Satanic cult!” This to me, has always signaled a lack of genuine creativity when it happens on (a number of) TV shows. Coming up with big bam plots is an easy ploy for the ADD riddled teenage market.

But sometimes you can sense the desperation for ideas, like a magician scrounging around for another rabbit. What combination of crazy hasn’t been attempted? Transsexual dinosaurs?

Coming up with big bam plots
is an easy ploy for the ADD riddled teenage market.

Even movies do this, we all know those mainstream big budget films that are the latest CG effects vehicles. Story and script gets pushed aside in favour of explosions and car races. There’s definitely a market for these kinds of films and they can be great escapism, but I’m more interested in the movies that do justice to the other 99.9% of our lives when we’re not chasing zombies in ships.

Day to day life is a to-do list of monotonous activities, when we’re not hating our job we’re getting petrol for our cars, standing in lines to buy groceries or cleaning the toilet. We get blinded by routine, which is why we resort to glittering vampires.

But I find the most captivating movies, the ones that linger in my consciousness long after the credits roll, are those that capture life in its glorious messy complexity and bring to life beauty in the everyday; stories about ordinary people told in extraordinary ways.

These kinds of stories take a special kind of talent, the ability to see past the mundane to the connectivity that ties all humans together.

I find the most captivating […] those that capture life in
its glorious messy complexity.

Think of Lost in Translation, Sofia Coppola’s lush atmospheric film about two strangers wiling away their time in a Japanese hotel, finding redemption in each other’s company. On paper, the tagline sounds dull and uninspiring.

In Coppola’s hands the story is told through long beautiful shots of the city, exchanged glances and a minimal amount of words. The characters don’t monologue about their unhappy marriages, having explosive arguments with their spouses.

We see the ageing celebrity Bob Harris (Bill Murray) sitting in his hotel room, looking glum as his wife faxes through carpet samples for their house. Or Mike Leigh’s award winning Happy-Go-Lucky about an insatiably optimistic primary school teacher who frustrates everyone around her with her happy-go-lucky attitude. The film is completely character-driven, the events that take place are few and unspectacular.

Poppy gets driving lessons, goes to a salsa class, has a student who’s bullying other children and visits her pregnant little sister.

The film’s climax centers around Poppy’s cynical driving instructor whose bitterness and negativity threatens to derail her positivity.

The brilliant driving lesson scenes boil with tension as Poppy desperately tries to maintain equilibrium. These scenes are rich in subtext and would be difficult to write, requiring talented actors to do justice to the subtleties.

But the product is brilliant, a reminder of what keeps us coming back to the cinema, moments of gold in which fiction is truer than reality. J.G Ballard says “Given that external reality is a fiction, the writer’s role is almost superfluous. He does not need to invent the fiction because it is already there.”

Given that external reality is a fiction, the writer’s role is almost superfluous. He does not need to invent the fiction because it is already there.” There are the opposing motivations that all artists face; selling out for money or being true to your creativity. In a world driven by the Hollywood machine that ticks over producing meaningless comedies and adventures touting the latest celebrities and special effects, there’s no doubt that an overwhelming motivation for making films is money.

But money disappears as fast as these films will from people’s memories. The greater challenge is to create the kinds of stories that are deeply rooted in humanness and will hang around in the collective subconscious for a long time.

David Foster Wallace talks about embracing the realities of life in his commencement speech, given to Kenyon graduates. “It will actually be within your power to experience a crowded, hot, slow, consumer-hell-type situation as not only meaningful, but sacred, on fire with the same force that made the stars—compassion, love, the subsurface unity of all things”

Do justice to the ‘subsurface unity of all things’ and create extraordinary stories about seemingly ordinary things.

We’re all looking for meaning, the things that make living life worthwhile. Film is such a fantastic medium to communicate these values; the camera can zoom into every nook and cranny of human interaction.

Do justice to the ‘subsurface unity of all things’ and create extraordinary stories about seemingly ordinary things.