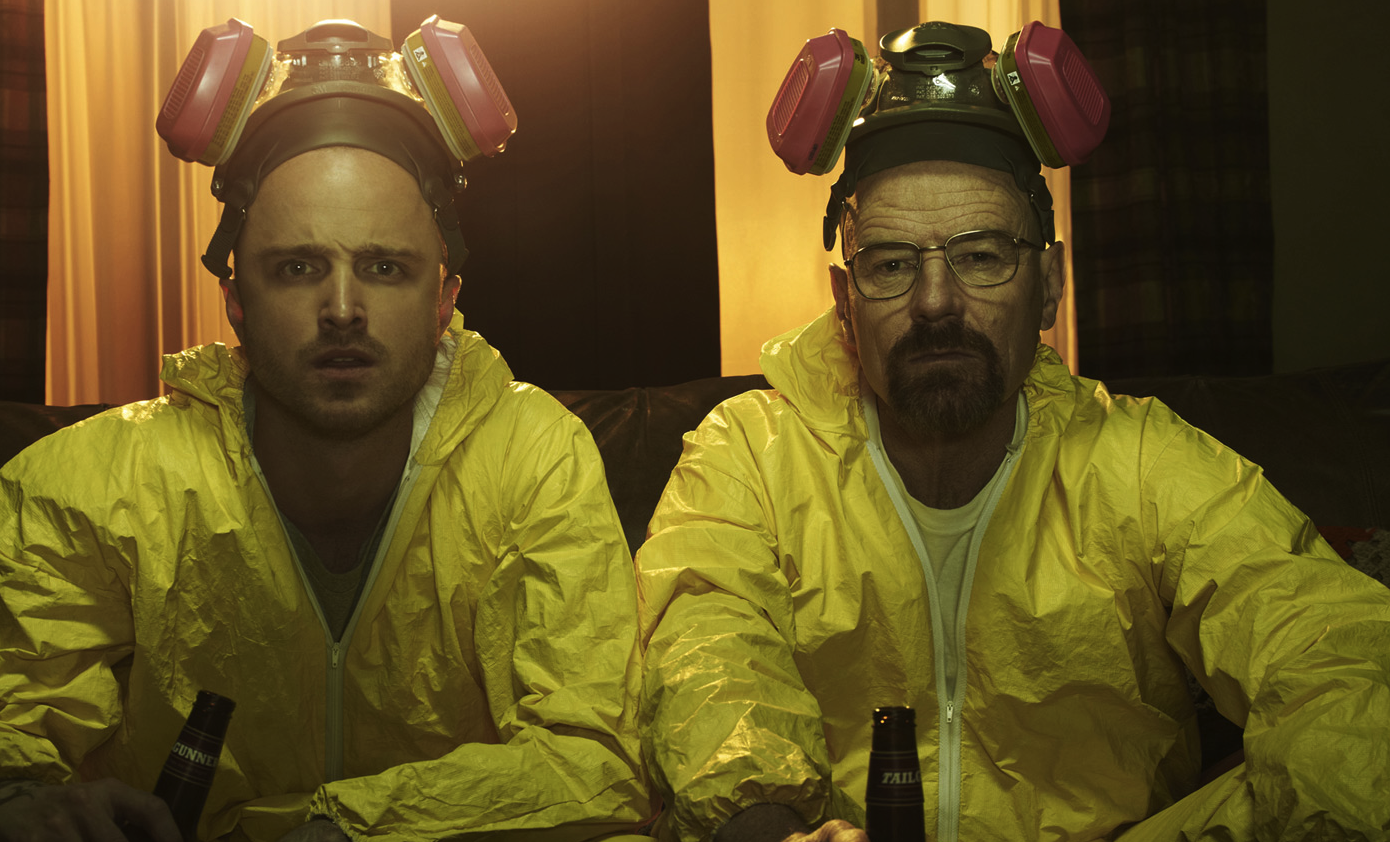 With the 5th and final season of Breaking Bad underway, let’s look back at how it started. The pilot episode planted this drama series squarely on the map and to my taste, Breaking Bad became an instant classic. The show is loved as much by its audience as by the critics and industry peers. Most agree that Breaking Bad offers us the very best of what is currently on the screen – and it all started with a brilliant script. An RV and a man in underpants (4mins)

00.00 An RV with driver and three bodies races through the desert, goes off the road, stuck. 01.00 The driver, in underpants, comes out, distressed. 02.00 Underpants man goes back in, takes a vide camera, puts on a shirt. 02.30 Underpants man is Walter White. To camera: “This is not an admission of guilt.” Addesses family. 03.30 Sirens approach. Walter White faces the sirens, ready with a handgun.

Imagine opening a new TV show by showing the life of a 50-year old goody two-shoes chemistry teacher, whose greatest excitement is getting veggie bacon for breakfast on his birthday. Now this is exactly what Act One shows us, for a full ten minutes. It would have been indigestible, dead boring and plain awful writing. But by moving five minutes of excitement from episode climax to the front, the entire expositional opening becomes palatable. It’s a familiar technique and Breaking Bad will rely on it often.

The life of Walter White (11mins)

04.30 5am and Walt lies in bed, awake. 05.00 Walt on his stepper, coughing. Was once member of Nobel winning chemistry team. 05.30 50th birthday breakfast: veggie bacon breakfast with wife Skyler and son Walt Jr. 06.30 Walt arrives at school with his son. 07.00 Walt teaches chemistry – the study of change. One unruly student. 08.30 Walt moonlights at the car wash. Boss Bogdan takes advantage of Walt’s compliance. 09.30 The unruly student arrives with car and girlfriend. They mock Walt. 10.00 Walt is driving. The glove box won’t shut. 10.30 Surprise birthday party. Skyler is pregnant, her sister Marie with DEA husband Hank. 11.00 Hank shows off his hand gun and Walt reluctantly watches as he gives it to Walt Jr to hold. 12.00 TV report on Hank’s meth lab seizure: $700k. “I’ll take you on a ride along! Get a little excitement!” 13.00 Walt in bed. Skyler gives him a hand job while focusing on her ebay auction. 15.00 Walt collapses at the car wash.

Here is a man whose life can’t possibly get any worse. Why doesn’t he just kill himself rightaway? Walter White is surely not the aspirational hero, rather the identificational one. Don’t we all have at least something in common with Walt? He represents the metaphor of someone not really alive but merely getting by. This must end, either by death – or excitement. Guess which. The thematic statement in this first act is expressed in Walt’s teaching, when he talks about chemistry as the study of ‘change’. Breaking Bad writer/creator Vince Gilligan is foreshadowing here what will happen to his hero. Like all great transformational characters, the audience craves their change. Here we are promised that this change will come about. Just hang in there. Later, the promise of excitement becomes a visual anticipation when Hank offers Walt to take him along on a meth raid. The act ends with the Inciting Incident. 16.00 In the ambulance, the paramedic asks Walter: are you a smoker? 17.00 Full body scan. 17.30 Doctor delivers verdict: lung cancer, inoperable. “I’ll live maybe another couple of years”. 18.30 Walt comes home, Skyler fusses over credit card, asks “how was your day?” Walt: “Fine.” 19.30 Bogdan doesn’t get away with his attitude any longer. Walt: “Fuck you – and your eyebrows!” 20.30 Walt calls Hank to asks if the meth raid ride-along offer is still open. 21.30 DEO officers Hank and Gomez in car with Walter, waiting for the school bus to pass. 23.00 Hank and Gomez wait in the car before the raid. Tipp-off about ‘Captain Cook’. 24.00 Walt wants to go inside, see the actual lab, has to wait in the car. 25.00 Walt sees former student Pinkman sneak out 1st floor window. “Oh my God… Pinkman?” (in underpants).

Did you realise that both Walt and Jesse are in underpants when we see them on screen for the first time? Breaking Bad is full of delightful parallels. My absolute favorite examples are in Episode S2E12 “Phoenix”, which is possibly the best hour of television drama I have ever seen.” In this Second Act, already Walt’s health verdict leads to an immediate change in his behavior – but he is selective to whom he shows it. From now on he will keep secrets – big secrets – mostly for the people he loves the most: his family. I’m not an expert on TV drama structure but it strikes me how we have a mid point with almost the exact dynamics as the best mid points in film. The two main antagonistic characters meet in person for the first time and the story takes a dramatically different direction. It is a major reversal that turns a threat (cancer) into an opportunity (give his family what he’s never given them). This episode mid point is at the same time the end of Act One for the whole season. Walt’s goal is clear: to make enough money to set up his family for life. 29.00 Marie pries on the Whites’ life, inquires about Walt’s changed behavior. Skyler denies. 30.00 Walt shops for cooking tools and containers at school. 30.30 Walt sets the standards with Jesse, who in stead claims cooking is an art, not chemistry. 32.30 Where are we gonna cook? They decide on an RV. 34.30 Jesse wants to know why all this. “Sixty and breaking bad?” Walt: “I am awake.” 35.00 Walt Jr is fitting pants, with Walt and Skyler. Bullies make fun of him. 37.00 Walt takes on the bullies, attacks their kingpin. All freak out; they call him a psycho.

With the main plot now well underway, there’s some time for character exposition and subplots. The relationship Walt/Jesse will be volatile and Walt now protects his family with greater fervor than ever before. Interesting to see how the third act out (the act climax) happens on a positive note, accentuated by the uplifting score. Often Act Three has the ‘all is lost’ or ‘lowest point’ that we find in movies at the end of Act Two. Here it is the silence before the storm as Act Four will again give us a major twist, leading to a powerful climax.

Back with a vengeance (14mins) The opening of this act is a mythical threshold sequence, expressing the idea that Walt is traveling to a new world. The dialogue “back with a vengeance” sets up what is to follow: Emilio will soon literally be back with a vengeance, introducing the final act climax. For the first time we see the consequences of Walt’s other explosive relationship, with the DEA, through his brother-in-law Hank. This is one of many potential future conflicts set up in this first episode. Don’t forget to download the screenplay of that first episode. You’ll see that not only is Breaking Bad a fabulous show to watch, the script is pure delight to read. Enjoy!