I reread Stephen King’s how-to diatribe, On Writing. In fact, I read quite a few grammar books as a refresher and to help spice up my articles for Script Magazine. With respect to King, I’m sorry. The more I read his book, the more I disagree.

His book is more pokable than the Pillsbury Doughboy. 1) A Thesaurus is actually a wonderful thing. Rogets can INSPIRE breathtaking sentences! And 2) don’t even get me started on adverbs. King was horrifically wrong about adverbs. But the one area upon which we can agree is that timid writers suck the big one.

As I’m sure most of my brilliant readers already know, King trashed timid writers when it came to passive verbs and sentences: 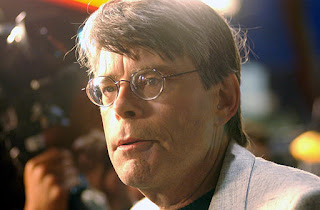 (Oh, you mean that little grammar book that’s SO pre-digital age and revised only 4 times since 19-frickin’-18? That one? Did you know that E.B. White was an essayist and writer for The New Yorker? In 1957, he wrote, “I felt uneasy at posing as an expert on rhetoric, when the truth is I write by ear, always with difficulty and seldom with any exact notion of what is taking place under the hood.” Even Strunk, the English professor, said, “the best writers sometimes disregard the rules of rhetoric. When they do so, however, the readers will usually find in the sentence some compensating merit, attained at the cost of the violation.” WHAT? You can break the rules? But back to King.)

Messrs. Strunk and White don’t speculate as to why so many writers are attracted to passive verbs, but I’m willing to; I think timid writers like them for the same reason timid lovers like passive partners. The passive voice is safe. There is no troublesome action to contend with; the subject just has to close its eyes and think of England, to paraphrase Queen Victoria. I think unsure writers also feel the passive voice somehow lends their work authority, perhaps even a quality of majesty. If you find instruction manuals and lawyers’ torts majestic, I guess so.

(But sometimes the passive sentence IS majestic. These are the times that try men’s souls. How are you going to improve upon that sentence? It’s perfect! If you wanted to make it active, you’d have to write, “We live in the kind of times that try souls.” Or maybe we should make the word “times” active since that’s what’s screwing with our souls? “These times try men’s souls.” Eh. “Times like these try men’s souls.” Ugh… We could make “souls” active. “Men’s souls must endure trying times as these.” Or how about: “Soulwise, these are trying times!” Oh puh-lease. Sorry! Back to King.)

I won’t say there’s no place for the passive tense. Suppose, for instance, a fellow dies in the kitchen but ends up somewhere else. The body was carried from the kitchen and placed on the parlor sofa is a fair way to put this, although “was carried” and “was placed” still irk the shit out of me. I accept them but I don’t embrace them.

(It’s not “was carried” and “was placed.” It’s “was carried… and placed.” Nothing wrong with that. Sorry! Back to King.)

What I would embrace is Freddy and Myra carried the body out of the kitchen and laid it on the parlor sofa. Why does the body have to be the subject of the sentence, anyway? It’s dead, for Christ’s sake! Fuhgeddaboudit!

(Funny that King writes “Fuhgeddaboudit!” as this kind of “offbeat,” rogue word was strictly prohibited by Messrs. Strunk and White. Slang and diction? Are you kidding? In fact, White decreed about thirty years ago that you can’t write slang because, “by the time this paragraph sees print, uptight, ripoff, rap, dude, vibes, copout, and funky will be the words of yesteryear.” Sorry, dudes! Back to King.)

…And remember. The writer threw the rope, not The rope was thrown by the writer. Please oh please. 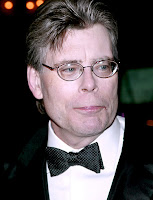 Or what if you used the passive voice to emphasize a passive character like the way Germaine Greer did in The Female Eunuch: “The married woman’s significance can only be conferred by the presence of a man at her side, a man upon whom she absolutely depends. In return for renouncing, collaborating, adapting, identifying, she is caressed, desired, handled, influenced.” The structure may be passive, but there’s passion behind Germaine’s words.

In any case, I do generally agree about active verbs, although exceptions can be made, kinda like voice overs. Just because someone broke the rules, the world shouldn’t get hysterical. To King’s bigger point, I absolutely agree that timid writers suck. In novels, according to King, timid scribes tend to embrace a passive voice.

I’ve always wondered how this translates into screenwriting.